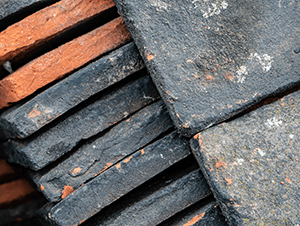 WHICH ROOF TILES LAST THE LONGEST?

In practical terms, clay roof tiles and natural slates last the longest, with usable examples over 100+ years being relatively common - on occasion customers bring in clay roof tiles or slates to be matched that are much older.

We have seen clay roof tiles that are estimated to be at least 250 years old that still had plenty of life left in them.

Concrete tiles degrade over time in both appearance and integrity, and they will certainly be approaching their 'twilight years' after 60 years - having said that we are regularly asked to match concrete roof tiles laid just after the end of WW2 - over 70 years ago - that are still in fair condition.

Environmental factors such as pollution or severe weather (such as in coastal locations) can have a marked effect on roof tiles: when we see old roof tiles from within the M25 boundary surrounding London, it is readily apparent how much worse their condition is than those that we see of a similar age from the Home Counties.

Roof tiles and slates are not designed to be walked on - doing so, when installing solar panels for example, leads to many breakages and leaks.

Pressure washing of roof tiles and slates is arguably the worst thing that can be done to a roof, and it is strongly advised against. If moss is a problem or unsightly then we recommend the application of a proper Moss & Mould Remover (such as the Cromar Moss & Mould Remover that we supply), and that the instructions are diligently followed.

WHERE CAN I FIND LONG LASTING ROOF TILES NEAR ME?

You can find long lasting clay roof tiles and natural slates in any of our branches listed below or we deliver nationwide to you: